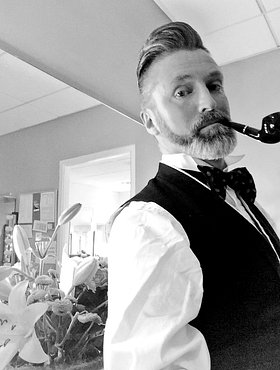 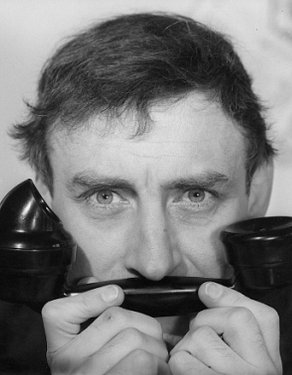 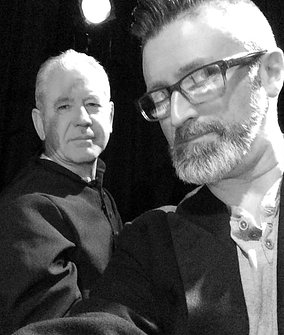 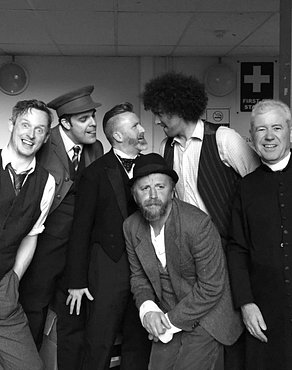 DID YOU WRITE THESE LEGS? by Paul Boyd, Irish Times April 2016

Dan Milligan turns to me and shouts, “Did you write these legs?”.

If you’ve ever read Puckoon, and a surprising number of people in Ireland have if the reaction to the three national tours of the show since 2009 is anything to go by, you will know that it breaks the conventions of the novel in almost every way.  Characters come and go, plots appear and wane, jokes come thick and fast, and the lead character, Dan Milligan, addresses the The Author of the story (the narrator, that little reading voice in your head) directly.  He questions The Author’s intentions, worries about his ability to tell the story properly, and downright refuses to participate in action of which he doesn’t approve.  “I’m gettin’ out of dis chapter,” he moans at one point, “It’s too bloody unlucky for me”.

With Puckoon Spike rewrote the rules of authoring a novel, in much the same way that he had already rewritten the rules for producing radio comedy, and he would do the same for TV sketch comedy in the years to come.  In whichever medium he was working Spike’s approach was the same; find out where the four walls are, and then flatten them.  Spike worked without walls.

This was the mental attitude that we knew we had to achieve with the stage version of Puckoon.  We had to think sideways.  We had already agreed that music should play an important role in the show and so within a few days of rehearsals commencing I had agreed to tour with the production in order to ‘keep the music elements live’.  Shortly after that my piano was moved on stage because ‘I might as well be seen’.  We decided to employ the device of a narrator, called ‘The Writer’, against whom the characters in the show, and Dan Milligan in particular, could rail; but who could play that part given that the five cast members were already required, between them, to portray the British Army, the IRA, a troupe of Boy Scouts, and the entire population of the Sligo village of Puckoon?  Well, I was ‘already there on stage, doing nothing’.

That is how a real-life writer has reluctantly ended up on stage playing The Writer of a play in which the characters are reluctant to participate. Spike would have loved that idea.

Of Puckoon Spike wrote, “This damn book nearly drove me mad.  I started it in 1958 and doodled with it for four years.  I don’t think I could go through it all again, therefore, this will be my first and last novel”.  It wasn’t.

Of Puckoon I write, “This damn play nearly drove me mad.  I started it in 2009, ended up in it and toured with it on and off for seven years.  I don’t think I could go through it all again, therefore, this will be my first and last play”.  It won’t be.

So here I am standing in the wings of a theatre.  I’m wearing a costume. I’m currently appearing in the 2016 national tour of Puckoon playing the role of The Writer.  And for an actual writer it’s oddly terrifying.  Puckoon, the book, the play, and the fictional village, is populated entirely by idiots, so I know that really there is nothing to be frightened of.  Except, perhaps, the escaped panther that is loose in the woods.  I should be frightened of that.  Or the IRA coffin filled with TNT.  Yes, that’s scary too.

I’m standing in the wings of a theatre.

I first met Spike Milligan in 1998 when he was already a very frail and elderly man (he died just four years later); his daughter Jane, now one of my closest friends, was playing opposite me in a musical in Basingstoke.

Spike came to see the show one night, and when I was presented to him afterwards I instinctively reached for his arm on my way to instigating a friendly handshake.  “Get your filthy hand off my dirty arm,” was his greeting.  I later learned that he greeted most new people that way - the trick was to ignore the insult and carry on regardless.

Spike Milligan: "Get your filthy hand off my dirty arm"

As rehearsals began early in 2009 I was in attendance to doctor scripts and write the show’s original musical score.  The company’s artistic director Zoë Seaton had realised during the production’s development period that it wasn’t going to be enough simply to dramatise Puckoon; this book was unique and had to be adapted for the stage in a way that encapsulated Spike’s sense of anarchy.  We had to think like Spike.  “I’m Irish,” he once said, “we think sideways”.

And Irish he truly was.  In 1999 The Independent newspaper presented Spike with questions submitted by its readers; one asked, “You carry an Irish passport. Do you see yourself as Irish?”.  He replied, “I never see myself as Irish, but I am. My father and mother were both Irish and had Irish passports.  I had a British passport, but when I went to get it renewed, and said my father was born in Ireland before 1900, they said I couldn't have a British passport.  So I said, fuck you. I went to the Irish Embassy and I said: "My name's Spike Milligan, can I have a passport?" And they said, "Oh yes! We're short of people.””.

That show in Basingstoke was, coincidentally, to be my final job as an actor.  By 1998 I was officially a writer and I had a number of commissions for new musicals, so I gave up performing to take up the life of a creator and director of musical theatre, a career that continues to this day. I never really enjoyed performing anyway; it was all right once you were out there on stage, but I could never stomach the standing in the wings waiting in full costume just beforehand.

Some years passed, as did Spike, and in 2008 Big Telly Theatre Company, for whom I had written on a number of previous occasions, asked me to join the team adapting Spike’s seminal novel Puckoon for the stage.  I re-read the book and concluded that it couldn't be done.  So I signed up immediately.  Putting aside worries about Spike’s erratic writing style, his scattergun approach to plot, his over-populating with characters, and his scant regard for continuity, I realised that any book set in a small Sligo village in which an Englishman, an Irishman, and a Jew walk into a bar, or in which a Free-stater widow mourns the loss of her midget husband, or in which a Chinese policeman becomes the smartest Garda in town, must be a work of true comic genius.  And who am I to deprive theatre audiences of true comic genius?