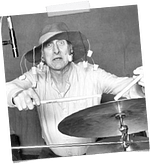 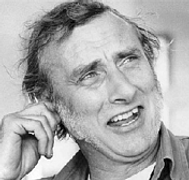 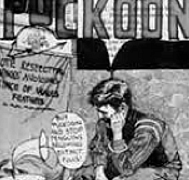 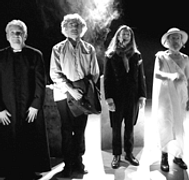 Terence Alan Patrick Seán Milligan KBE (16 April 1918 – 26 February 2002), known as Spike Milligan, was an Irish comedian, writer, musician, poet, playwright and actor; the majority of his working life was spent in the United Kingdom.  Milligan was the co-creator, main writer and a principal cast member of ‘The Goon Show’, performing a range of roles including the popular Eccles. Milligan wrote and/or edited many books, including ‘Puckoon’ and his six-volume autobiographical account of his time serving during the Second World War, beginning with ‘Adolf Hitler: My part in his downfall’.  He is also noted as a popular writer of comical verse, much of his poetry was written for children, including ‘Silly Verse for Kids’ (1959).  After enormous success with the ground-breaking British radio programme, ‘The Goon Show’, Milligan translated this success to television with ‘Q5’, a surreal sketch show which is credited as a major influence on the members of ‘Monty Python's Flying Circus’.

‘Puckoon’ is a comic novel by Spike Milligan, first published in 1963. It was his first full-length novel, and only major fictional work.  Set in 1924, it details the troubles brought to the fictional Irish village of Puckoon by the Partition of Ireland: the new border, due to the incompetence of the Boundary Commission, passes directly through the village, with most of the village remaining in independent Ireland, but with a significant portion in Northern Ireland. The protagonist of the novel is the feckless Dan Milligan, a man so lazy that the author is obliged to take direct action to prevent him spending the entire novel lounging about at home; thus alerted to his status as a fictional character, Dan frequently breaks the fourth wall, speaking directly to the writer about the trouble he's been put to.

The hit stage show of ‘Puckoon’ was commissioned and first produced by Northern Ireland’s longest-established theatre producer Big Telly Theatre Company. The initial 20-venue Irish tour ran from January – March 2009 and played to packed houses, with many shows sold out well in advance, culminating in a week of performances in Dublin. The show is adapted by the company from the book by Spike Milligan and a dramatisation by Vincent Higgins, features music and songs by Paul Boyd, and is directed by Zoë Seaton. The 2011 tour, produced again by Big Telly, opened in February and culminated in a three week engagement in London’s West End at Leicester Square Theatre.  The 2016 tour saw the show reopen in Dublin in April before embarking on a tour across Ireland, England, Scotland, and Wales.

I TOLD YOU I WAS ILL: THE LIFE AND LEGACY OF SPIKE MILLIGAN (Cathy Henkel, 2005)

Some famously funny Spike lines, including some that can be found in his hilarious novel ‘Puckoon’  ...

"A sure cure for seasickness is to sit under a tree."

"And God said, 'Let there be light' and there was light, but the Electricity Board said He would have to wait until Thursday to be connected."

"Are you going to come quietly, or do I have to use earplugs?"

"Contraceptives should be used on all conceivable occasions."

"For ten years Caesar ruled with an iron hand. Then with a wooden foot, and finally with a piece of string."

"How long was I in the army?  Five foot eleven."

"I have the body of an eighteen year old.  I keep it in the fridge."

"I spent many years laughing at Harry Secombe's singing until somebody told me that it wasn't a joke."

"Is there anything worn under the kilt?  No, it's all in perfect working order."

"Money can't buy friends, but you get a better class of enemy."

"My Father had a profound influence on me, he was a lunatic."

“A man can’t have everything - I mean, where would he put it?”